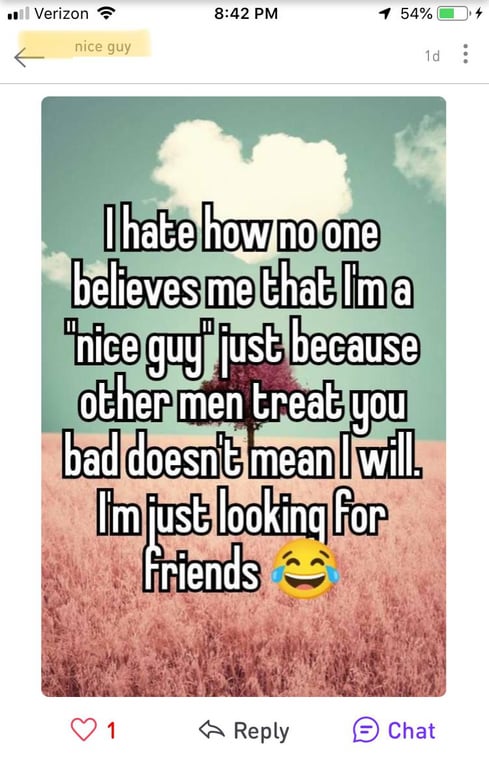 Remember to read our [Rules](https://www.reddit.com/r/NiceGuys/about/rules/) and to remain civil. Thank you. *I am a bot, and this action was performed automatically. Please [contact the moderators of this subreddit](/message/compose/?to=/r/niceguys) if you have any questions or concerns.*

And if a woman befriends him, he’ll complain how she’s just “using” him because she treats him like a friend and won’t send him nudes.

Benefits for him, maybe. I'm guessing the woman in the equation would just get obligations.

Hate when that happens

What does he mean by no one believes him? Like, did he tell some chick, "yeah I'm a nice guy, I won't be a dick," and she just said she didn't believe him? I'm confused when nice guys say this. I'm pretty sure no one is going to explicitly tell you, "No, I think you're secretly an asshole, can't trick me!" If they're trying to read into women not responding positively then I don't know what to say. It's not like saying you're a "nice guy" is gonna instantly earn you girl friends. They'll probly be a little creeped by you specifically and explicitly saying that you're nice cause you'll come off like a damn psycho.

And even if he was really nice, like the nicest person in the world, that doesn't automatically make him a great match as a friend for everyone. You can be nice, but if there's no connection, shared interests, compatibility, it's not someone you necessarily want to hang out with. Maybe these women aren't looking for friends. And to assume any woman who doesn't want to be his friend has been damaged by other men is outrageous. As if, if someone doesn't like him, it has to be about something else, no one could ever not want him. Lastly, he clearly is only talking about women, so maybe it's sketchy that he's only trying to "befriend" women and that he's using past bad romantic relationships as his comparison. It's super obvious that he isn't "just looking for friends."

Being genuine vs looking for a reward

I learned a while ago that you can't just say things, you have to prove them. I enjoy doing that.

If you have bad experiences with certain types of people (in this case men), why would you want to go right back into a relationship with a man?