There’s just something about Combat Wildshape that makes Druids so fun. Original comic template from u/thegrohltroll

There’s just something about Combat Wildshape that makes Druids so fun. Original comic template from u/thegrohltroll 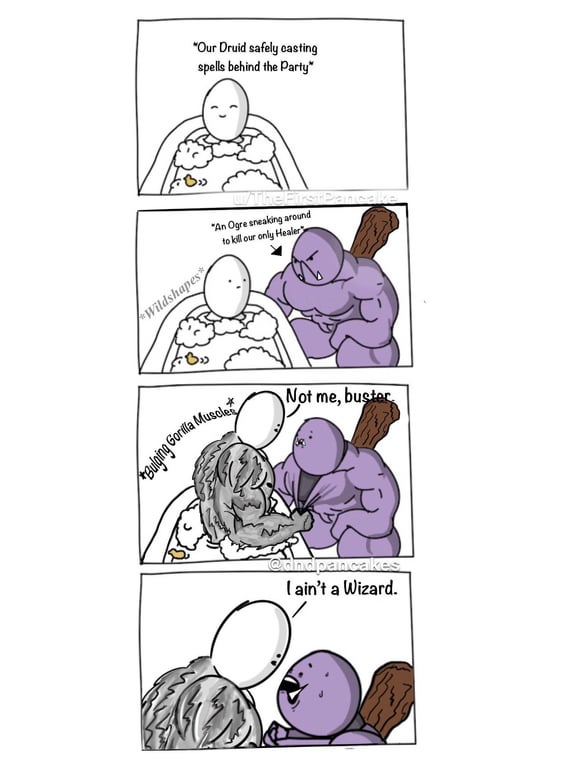 Abjuration wizards with defensive spells my friend. My abjuration wizard never took damage except during major boss fights. And even then the ward was invaluable.

Hahaha fair, I was divination wizard though, saved myself with portent on the second attack

I'm in a party tha was basically only casters in a gritty realism campain, it got to the point that my abjuration wizard was the tank, god bless elven chain!

Warforged wizard with a 2 level dip in cleric. I wear fucking plate.

That's definitely one way to go about it. I personally never multiclass unless there's a strong thematic reason for it. But platemail wizard definitely sounds tempting...

If I roll a wizard, it’s gotta be something like Abjuration with Tough and War Caster.

I have a chronurgist hobgoblin that walks around with studded leather. He's pretty beefy too.

I also thought about doing an Orc Chronurgist based on Obeka from MtG. Just have her literally punch time to use her class features

If you are surrounded by a 20ft radius of undead, no-one can get close enough to hurt you.

If you are surrounded, that's generally at least some cover.

Not all Dms run line of shot from shooter to target. With ranged or magic. I do but my first group I ever joined didn't.

Fair. Although in the books other creatures are used as an example for cover, it is up to the DM if they wish to interpret it in that way. Although they better be consistent with that ruling from both sides.

It's hard sometimes to see if something would or wouldn't hit someone in the line of the shot from A to B. Like oh it just hits the corner of this other guys square, should we count that? The guy isn't actually 5 ft wide.

Everyone laughs at the druid until, they get mauled by a pissed off deinonycus.

But that's what heat metal is for.

i messed up my joke... goddamned

Not to mention the first three levels of my PC were all Barbarian...

And not to mention the perks of circles sich as the Spores one. Seriously, wtf is wrong with that dmg and shield?

I just wish it was a bonus action though

Yes. This is why I keep a power word kill handy.

Good luck PWKing a level 20 spores druid. Or even damaging them.

Simple enough, Forcecage into Sickening Radiance, True Polymorph into a chair, or Portented/Convergent Futured Feeblemind, ot much the Druid can do there. The Wizards excels at killing without doing a single point of damage at level 20 :)

After you use forcecage the druid turns into an air water or fire elemental and slips out of the cage. If you don't leave a hole in the forcecage then you won't be able to cast sickening radiance and the druid can just wait you out. Even with a feeblemind your still dealing with 120 regenerating hit points per round.

You cannot leave the cage through non-magical means bud, either make the save to teleport or prepare Gaseous Form some way or another >:) Sure, Feeblemind doesn’t take away Wild Shape, but by the time a Druid can no longer cast spells, they are a lot easier to deal with. As always, Portent/CF Polymorph into a harmless little shair never hurts either, and hood luck winning initiative against a Chronurge or even do a single bit of damage to em (Contingency) ;)

Wildshape is considered a magical transformation, so forcecage wouldn't work, and while they can't cast while feebleminded tell that to the pissed off mammoth that knows you're it's enemy

“Pissed off mamoth”? Lmao, Contingency and Otillukes says hello. Wildshape is a magical transformation, the ability to turn into an air form elemental is not. Try again.

Nope, non-magical. Look here: “…can’t leave it by nonmagical means.” The phrase "a creature inside the cage can't leave it by nonmagical means" doesn't mean you can just turn yourself into a mouse/gas/etc and move out. Walking or flying are mundane movement, even if it was magic that gave you a fly speed or changed your physical size. Your method of leaving must itself be magical, which means it's basically going to be teleportation or planar travel, so you're up against the save. That excludes the "easy" methods of wild shape, polymorph et al, and gaseous form as escape routes. Sure, you can spam misty step to get out sooner or later, but that does require you to know the spell (and have it prepared, if that's a thing for you), and potentially burn a bunch of spell slots and waste a bunch of turns, just to escape from one spell. I don't call that "easy". Simple, if you have the proper tools at hand, but costly. (I'm making that distinction in the same sense that walking up a mountain is simple, but not easy.) There are a number of "save or suck" effects that give you another try at the save every turn, but unlike forcecage most of them don't cost you spell slots every time you try. But yes, trapping a powerful spellcaster inside a forcecage is probably not your best use of the spell.

Contingent spells can only affect the caster, have fun in your hamster ball.

You do realize there’s no way for you to harm the caster, right? Surely you’d realize at this point that you are practically getting chipped to death by Sickening Radiance ;)

Nope, for example, Air Elementals, have the Air Form trait, just as vampire has the shapechanger trait, and as a rule, their Shapechanger abilities are counted as nonmagical. It would say something like 'magically polymorphs' in the description of the ability, like in the case of metallic dragons and oni, if they were harnessing magic to transform themselves. DnD is very explicit in what it’s considered magical, it’s either said explicitly or a spell effect.

Although forcecage + sickening radiance is pretty hard to counter, feeblemind is mostly worthless, due to the infinite temp hp. True polymorph is also kind of unlikely to work due to the wisdom save, however a portent/convergent future fixes this problem. However, that does bring up another question: Are druids technically shapechangers? If so they are immune to the chairening.

Absolutely not, Feeblemind turns both your Mental stats of Intelligence AND Charisma to zero. Now not only can you not cast any spells, understand or speak anything comprehensible, your Charisma save becomes a flat -5. That turns Forcecage, which is already a difficult spell to escape through spell or innate teleportation via a Charisma saving throw, into something flat out impossible. And No, Druids are [not Shapechangers](https://twitter.com/JeremyECrawford/status/723579273936695296?s=20), if they were, it’d be explicitly stated. (Which is ludicrous for you to suggest, as you do realize…a Moonbeam would make it possible to disable Wild Shape.) There are also ways to deal enough damage while instantly petrifying a Moon Druid in 2 rounds, but I am sure you already knows what that spell is ;)

Town guards won't let us leave town (because of a quarantine that happened because of a rumor the sorcerer started, but that's another matter) so the barbarian attacked them. Sorcerer ran off with an NPC "to help them escape" and barbarian couldn't figure out how to open the gates. Me, a simple druid, turns into a giant spider, ends up as tank for the entire battle, climbs up and operates the gate mechanism, non-lethally gets rid of the guards, drives the horse and cart out through the now-open gates, picks up the other two who had climbed over the walls. The barbarian just stared as I took hit after hit without blinking. Then changed back to my natural (and proper sized) halfling form with no damage. WHERE'S YOUR RAGE NOW? (Then, as we were escaping, I cast Pass Without Trace, we ditched the cart and hopped on the horses, and we were gone.... without a trace!)

I sang Brave Sir Robin ran away the remainder of the session.

finally another meme that isn't "but i haf 44 spells!" or "but i can silently cast my spellz" also i now want to let the druid in my party wildshape everything but his head head of an aarokocra, body of a gorilla, legend

Haha yeah he’d be looking like Spaceboy from Umbrella Academy

Druid! Why did you stop casting? Oh ffs... Should have brought cleric along.

I grew up in the wild, motherfucker. Had enough of this shit, time to show you why animals know how I smell. *Punch in the belly*

I carry a tin bath and fill it with a Decanter of Endless Water before every battle. What kind of preparation do *you* do?

>/s Oh wait, it \*IS\* supposed to be a bathtub. I tought he was hulk-ing out of his wide, furry coat on wild-changing himself.Badly drawn bathtub looks like a wide coat, but for the yellow rubber duck.

You know, wizards can do this as well and they get it much earlier than you can wildshape into a gorilla.

I presume you are talking about Polymorph, something druids also get. Can you concentrate on another spell while polymorphed? And can you act as you normally would without having to make intelligence checks uing the animals mental stats to even remember what you were trying to do in the first place?

You mean at lv 2? If you are implying polymorph, wizards & druids get that at lv 7.

I'm aware polymorph is 7, but you can't become a gorilla with wildshape until level 10-15 depending on subclass.

You can become a gorilla(ape) at lv 2, if moon druid. For every other druid subclass it is lv 4. Unless you are talking about giant ape, which you can only become through polymorph. Dont know where you get that lv 10 -15 from? Unless you are talking about girallions or barlgura, which are monstrousity and demons, not beasts, so neither polymorph or wildshape can transform into it.

I played a half ogar druid with strength buff spells. I was not a ideal target to attack

All my wizard friends out there, do not fret. Being a frontline melee caster is only a shadow blade, misty step, and hobgoblin away

Yeah, my Druid cast spells in is bathtub too

Yesterday my wizard decided the druid's wildshape wasn't threatening enough. Cast polymorph and turned him from a horse into a giant ape. DM remarked you don't see that transformation sequence often.

I actually enjoy that these *"wars"* are bringing in some good memes.

We just pretending a wizard can’t polymorph into a T. rex