Really interested in knowing what this painting is.. My grandad found it in 1945 right after the war, when it fall out of the train that was supposed to go to Germany. It is oil on canvas I'd say

Really interested in knowing what this painting is.. My grandad found it in 1945 right after the war, when it fall out of the train that was supposed to go to Germany. It is oil on canvas I'd say 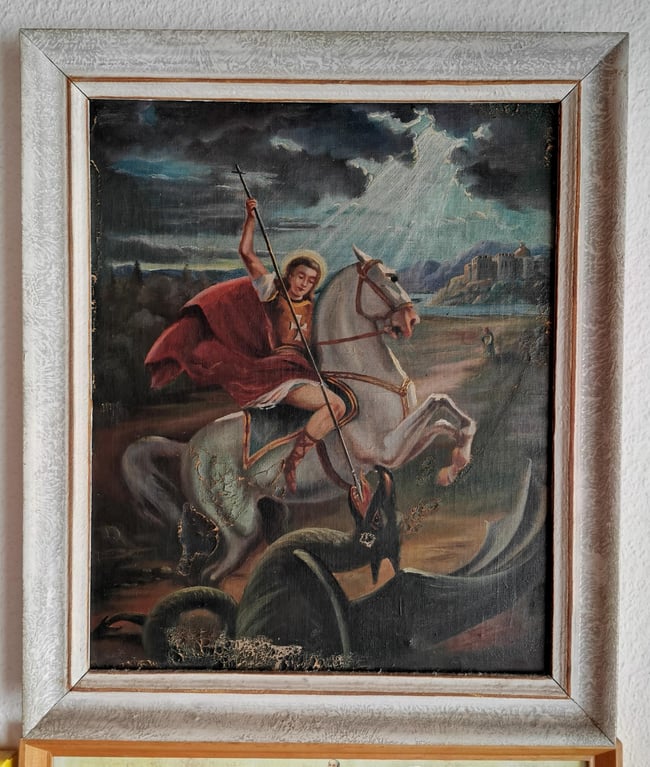 This is it. I have commemorative coins of this image

Well it’s not a book so nobody authored it! The artist who PAINTED this one I’m not sure. It’s a famous painting done by many artists the most famous of I’m not mistaken is Raphael bit this isn’t his… look for a signature and that will solve your mystery! Doesn’t look like any of the famous painters renditions that I have seen!

It looks like a votive-ish painting. What are you looking for? The meaning behind the symbols, or the hand of the artist? Also you wrote that it was supposed to go to Germany, from where? Is there anything written on the back of this painting? St.George as a theme was revived a lot during WWI, as a motivational story for the British to join and fight the war. Also St.George is a symbol of England, but it’s used pretty much everywhere in the world as a symbol in christianity and islam. Typical elements of the story and the votive composition: The George (the blond dude with the white horse at the center of the picture), The Sabra (the young princess, here represented by the little person in the distance -it’s so tiny-), The Cyrene (the castle, otherwise the city-kingdom of the princess, afflicted by), The Dragon (our evil friend). Here the artist decided to stress a lot on the “hand of God” disregarding “The magic red Garter” (that was the tool that God infused with his will and helped George and Sabra) that is supposed to be held by Sabra to hold the dragon down. St.George is one of the four “Saint Militants” (and associates with the Archangel Michael) as he was a roman legionnaire from Lydda, in Syria. So he is often associated with the army-military. By the way Sabra is represented here, I would cut out older versions of the story BOTH in French and Italian representations and their relative copies, and go straight into a more modern propaganda and militarism, or something inspired by it. edit: By the damage in the top-left, looks like the canvas has been cut off the original frame, rolled vertically and later on re-framed and fixed with some black touch ups. These areas are more opaque than the original. Unfortunately, I don’t think the paint was completely dry, or something like water (water pockets?) reacted with some of the re-paint and the re-attachment, from the canvas up, causing the flakes.

Thank you soo much for this explanation!

No problem. Honestly the entire "cut'n paste" thing set me a little off, I thought it was of poor quality because it lacks perspective, but surely meant something for someone else that wanted to carry it with them...

The cross on the chest looks to be a maltese cross. ​ That you have that person in the background is different, if there is one it is usually female and painted so you can make you who it is.

Thank you so much!!

Saint George? It's definitely either based off him or is a really funny version of him because George is the patron saint of England and the whole aesthetics of this one definitely doesn't match.

Thanks for your post, /u/realisticcarpainting! Please remember to comment "Solved" once someone finds the painting you're looking for. If you comment "Thanks" or "Thank You", your post flair will be changed to 'Likely Solved'. If you have any suggestions to improve this bot, please contact the mods with your suggestion and they will see about implementing it! Here's a small checklist to follow that may help us find your painting: - Where was the painting roughly purchased from? - Did you include a photo of the front, back, and the signature (if applicable)? Also make sure to join our Discord server: https://discord.gg/XPWJaxCVHz Good Luck with your post! *I am a bot, and this action was performed automatically. Please [contact the moderators of this subreddit](/message/compose/?to=/r/WhatIsThisPainting) if you have any questions or concerns.*