Is Caspian talking about Sleeping Beauty in this section? Or Snow White? I haven’t caught up on my fairytales in a while.

Is Caspian talking about Sleeping Beauty in this section? Or Snow White? I haven’t caught up on my fairytales in a while. 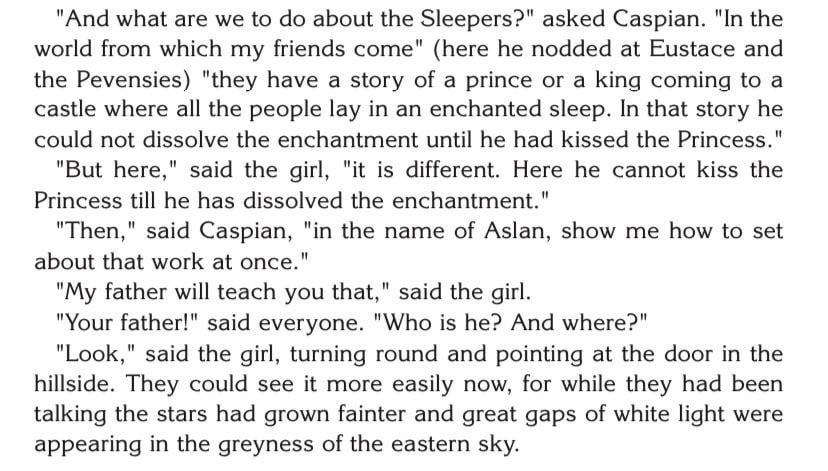 I'm pretty sure that Caspian is referring to Sleeping Beauty (as well as asking very subtly for a kiss).

I've always thought it would be hilarious if she just said "yep, that's right, go kiss them then".

In the Disney movies of these, Snow White is poisoned by herself with the apple and is found in the woods. Sleeping Beauty, Aurora is pricked by the spindle and then the three fairies enchant the entire castle to sleep until she wakes (from a kiss). I would assume he is referring to Sleeping Beauty. Weirdly though, Snow White was released in 1938, so it’s possible the Pevensie children could have seen Snow White by then in the timeline of the books, but Sleeping Beauty wasn’t released until 1959 so they would not have seen the movie version of this. Even more Interesting though, Dawn Treader released in 1952, 7 years before the animated Sleeping Beauty. I just read a brief synopsis of the fairy tale for Sleeping Beauty. The original version does not have the castle inhabitants fall asleep but the Updated version (later updated by the Brothers Grimm) does have that where the inhabitants also fall asleep. So Lewis must have learned this from the fairy tale.

You know they were actual fairytales before they became Disney movies. Anyway, in most versions, Snow White is put in a glass casket by the dwarves, so she doesn't "sleep" in the castle. https://en.wikipedia.org/wiki/Snow_White#Plot Whereas with Sleeping Beauty, I believe she was actually cursed to die by an evil fairy godmother, but 3 good fairy godmothers changed it so instead of dying, she and the entire kingdom would sleep until she wakes up.

oh that is interesting! thanks for the response!

Lewis must have been referring to the Grimm (German) version of Sleeping Beauty (called *Dornröschen* or *Briar Rose*), because the French version doesn't actually have a kiss!

I was not aware of that one. That's freaky.

That is Sleeping Beauty - the whole castle is enchanted. In Snow White, it's just SW herself who is enchanted.

There's a nod to Cinderella in *The Horse and His Boy*, and a nod to Hans Christian Andersen's The Snow Queen in *The Lion, the Witch and the Wardrobe*. And a nod to Sleeping Beauty here. Are there any **other** fairy tale references that people have noticed?