My dream Dendro + Electro reaction: Arc. Deals a percentage of DMG dealt to nearby enemies (percentage scales with EM) (20% Arc damage in this example)

My dream Dendro + Electro reaction: Arc. Deals a percentage of DMG dealt to nearby enemies (percentage scales with EM) (20% Arc damage in this example) 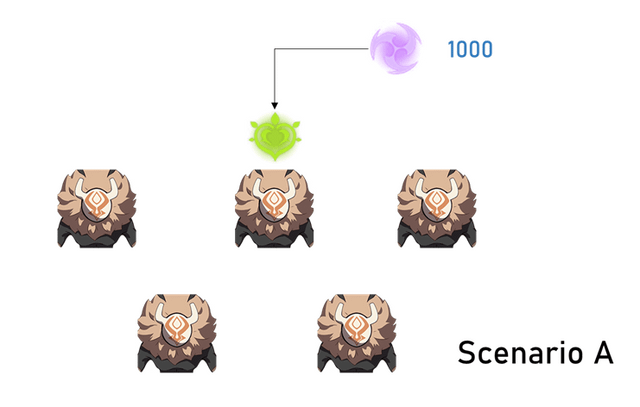 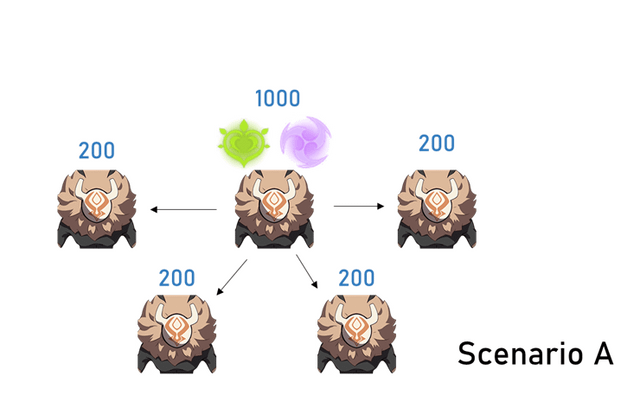 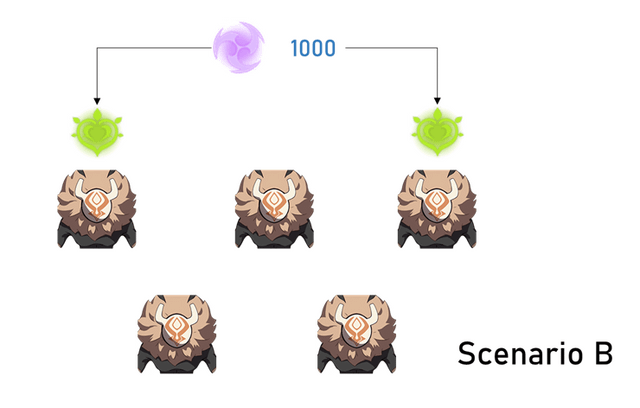 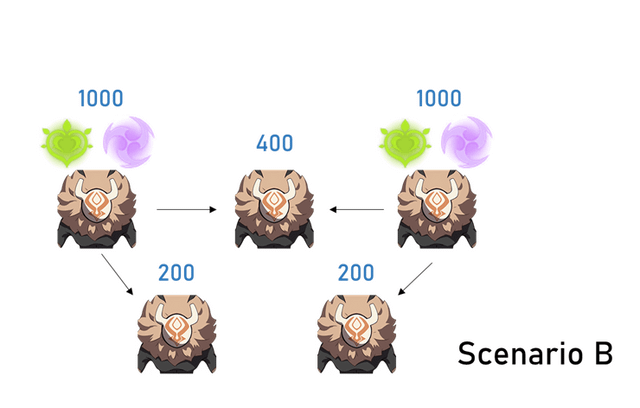 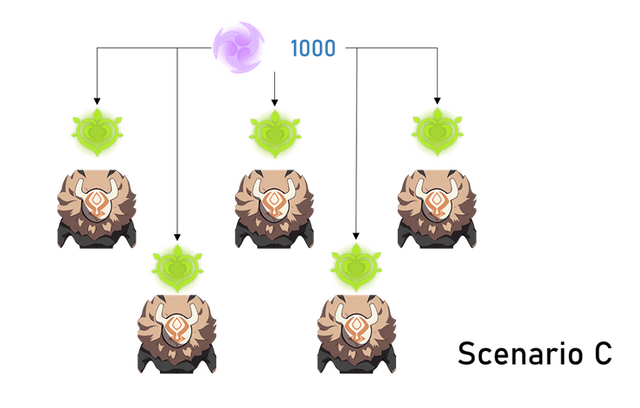 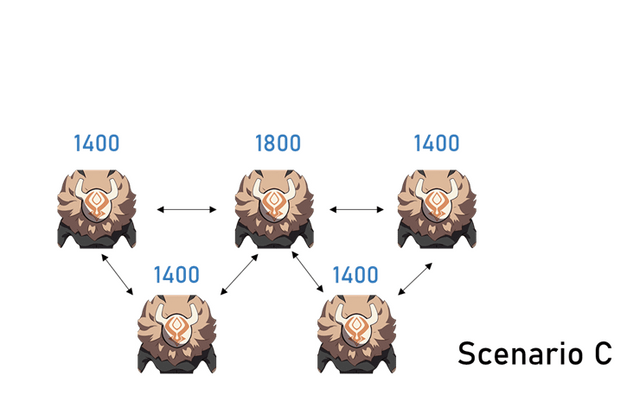 Sounds like what electro-charged should already be doing if I'm being honest. It does jump it's just... not impressive.

This. Electro-charged also has the problem of being so slow that you can't get chain reactions even if the group is standing in water, being continually shocked by the water. Frankly, we need a rework of electo reactions and for Dendro to be an element that has distinct effects other than just being plant growth to anywhere with this idea.

I agree. We're focusing too much on "grows thorny roots and entangles the enemy!" You mean like... freeze with a damage component built in? Surely miHoYo has more up their sleeve with Dendro, they've had over a year, and know the roots thing would only work on smaller enemies anyway. For my sake though, I too have my own ideas. My idea of Dendro is that it is the element that goes by the themes, "life finds a way," "life adapts to its environment," etc. I've followed that train of thought to have Dendro reactions mimic what each other element's resonance accomplishes in it's own way, lending Dendro to a more "one size fits all" role in a team. I left out hard numbers in the majority of cases because balancing is miHoYo's wheel house. • **Pyro - Burning:** Damage over time. - *Transforming reaction. EM will increase burning damage.* • **Hydro - Fruit:** Creates a fruit that heals for a set amount when picked up. *- Crystallize reaction. EM increases healing done. A character's "incoming healing" stat also further increases healing received.* • **Cryo - Brittle:** Chance to deal additional PHYS DMG against the target on normal, charged and plunging attacks for a duration. - *Transforming reaction. EM increases the reaction and PHYS DMG. PHYS DMG is a separate instance of damage.* • **Electro - Leech:** Creates additional neutral particles. - *Transforming reaction. Base is 1 per reaction. EM increases reaction damage and the chance of additional particles. EI, enough EM for +240% particles means always getting 3 neutral particles on a leech reaction, and a 40% chance for instead 4 neutral particles.* • **Anemo - Bloom:** Creates a seed pod that when picked up randomly provides one of the following effects: Recovers 24 stamina, Creates an upward draft at the location for a short duration. Reduces active skill and burst cooldowns by 1 second. *- Crystallize reaction. EM increases reaction damage.* • **Geo - Thorns:** Creates a crystallized dendro shield shard that when picked up creates a shield that periodically damages nearby enemies and retaliates when an enemy's attack hits. This shield is not overridden by shield shards created through crystallize with other elements. - *Crystallize reaction. EM increases shield health and damage.* **Dendro Resonance - Adaptation:** Increases EM +40. The duration of elemental auras, transformative reactions and shields made from crystallize is increased +20%. Additionally, all crystallize reactions increase nearby allies DEF, stacking 3 times, and all transforming reactions decrease enemy DEF, stacking 3 times. Each stack has an individual duration.

Would personally like to see Dendro be more of a damage/debuff element. Base effect is damage, then thorns slowing movement (with variations based on character). Pyro - Burning just as it is now, more Dendro added to burning is damage and longer duration. Hydro - Poison DoT effect that stacks based on number of applications (reactions between the two from scratch). Cryo - Thorns shatter causing damage to target and small AoE. Electro - Decreased elemental resistance. Anemo - Dendro effect spreads to others, allowing for continual application and damage with each pulse. Geo - Just normal crystallization.

electro charge should do what Zhongli's burst does

Petrify might feel more intuitive as a hydro + geo + pyro reaction if GI ever gets advanced reactions.

i mean the effect stunning opponent in place. It doesn't have to be petrify

Already got freeze as a simple stun reaction. I think they'll want to keep reaction sameness to a minimum. Vape and Melt are the only two that are as similar as they are.

Dendro+electro reaction is one thing, but can we focus for one second on superconduct and why it makes bo sense? It lowers physical resistance. Shouldn't superconductors superconduct, making electricity flow easier through them? Why doesn't it reduce electro resistance as well.

This.... This has always been my problem with the logic behind this reaction. I could argue maybe that the entire process would make the object more fragile thus the "physical resistance down", but that still shouldn't ignore actual superconducting part

>Shouldn't superconductors superconduct, making electricity flow easier through them? Well, if something is conducting better or in other words less resistant to electricity(don't confuse with lower Electro res) it'll be damaged less by same "amount" of electricity because main source of damage from electricity is heat due to resistance.

cant wait till dendro react with nothing like geo

Maybe they love dendro, then it can still be strong.

Then the dendro couuld be strong, while electro still sucks. I really like electro character, hope that wont happen.

Overload is fixed damage. Doesn't scale with Crit or ATK or anything other than EM and character level.

If it had no knockback, it would be infinitely better than overload with that alone.

Isn't this Swirl without element spreading?

I see this as OP wanting this to be amplifying reactions instead of transformative. So it's based on the damage dealt by the attack, which then multiplied by the EM-based percentage.

It's a nice effect, but I just don't feel like it fits electro reactions of any flavor.

I think it’d be a reaction like Melt called Convulse or something. Hopefully

I have a bad feeling that dendro will have a single reaction like crystalize or swirl that works the same way on the 4 other elements.

Sounds like Electro-Charged with extra steps. We all have high hopes for dendro, but I wouldn't be surprised if they don't add any new reactions. Burning reaction perseveres pyro aura as long as you feed dendro to it. Dendro schamachurls can apply dendro to you with an unavoidable attack making you potentially burn forever. If dendro characters can do the same, making a pyro-dendro-electro team could be good. An overload team, where you are burning enemies and triggering overload and the pyro aura doesn't go away. ##Overload teams new meta?

Grass is dendro. If we use electro skill while standing on grass would that mean this *Arc* will spread out until there is no grass left? Well, that could crash even the strongest PC.

I don't think Dendro would react with electro, every reaction have a scientific logic, I only see Dendro with pyro and or Geo and maybe hydro

I am confusion. I dont get the scenario C. Shouldn't it be all the same because everyone had dendro and are close to each other?

The one in the middle is close to everyone. Everyone else is only close to two other hillichurls.